Post by: Jennifer Chapman Smith
Collections and Exhibitions Manager
The inventory project is assisting the curatorial department in understanding the breadth and scope of the WCMFA’s collection. This is especially helpful when we examine the works of art in the collection by individual artists. We are fortunate to have fifteen works by the artist William Clutz in the museum’s permanent collection. It is significant to the WCMFA to have a variety of work by this artist since he credits the museum’s art school with beginning his artistic career. 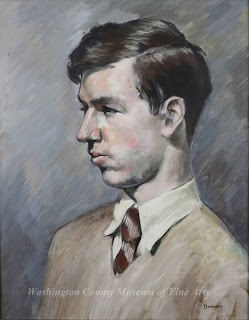 William Clutz was born in Gettysburg, Pennsylvania in 1933 and grew up in Mercersburg, Pennsylvania, about 30 minutes from the WCMFA. He attended Mercersburg Academy and attended the WCMFA’s art school in the late 1940s where he studied with Thomas Danaher, a WPA artist who received instruction from Hans Hoffman and Thomas Hart Benton. Clutz entered the annual Cumberland Valley Artists Exhibitions at the museum and won best of show in 1952, 1953, and 1957. Following graduation from the University of Iowa and study at the Art Students’ League, Clutz received numerous solo and group exhibitions throughout the United States and Europe. He is recognized as a significant proponent of abstract figuration in the renewed interest in figuration of the late 50’s and 60’s in such exhibitions as “Recent Drawings, USA”, 1956 and “Recent Paintings USA, the Figure,” 1962 at the Museum of Modern Art, New York, New York, and “The Emerging Figure”, Contemporary Arts Museum, Houston, Texas, 1960.
William Clutz, "Figures and Awning"
Clutz has approached his art from many different angles including abstraction, but his oil and pastel figural street scenes are his signature style. Inspiration for these compositions comes from the turbulent activity of the streets of New York City where Clutz lived. Children playing in the parks, cars zooming down the streets, passers-by flanked by skyscrapers, have all become subject matter for the artist.
His work is represented in major collections throughout the country, including the Metropolitan Museum of Art, the Guggenheim, and the Museum of Modern Art. Six of Clutz’s paintings in the WCMFA’s collection are currently on view in the Bowman Concert Gallery.
﻿

Posted by Jenn Chapman Smith at 9:45 AM